Jacksonville Mayor Alvin Brown and Consul general of France in Miami, Gaël de Maisonneuve commemorate 450 years of French History. “These wonderful events that start on the 27th in Fernandina, Mayport and Jacksonville will be the kick-off of three exciting years of commemoration, that will span all around Florida and comprise publications, exhibitions and symposiums" says Gael de Maisonneuve, Consul General of France in Miami.

Mayor Alvin Brown, Consul general of France in Miami, Gaël de Maisonneuve, Honorary Consul of France in Jacksonville, François Kloc, French dignitaries, businesses and nonprofit organizations will be hosting commemoration activities for the May 1, 2012 Sesquiquadricentennial, the 450th anniversary of French Huguenot Captain Jean Ribault’s arrival at the St. Johns River, which he named the River of May, and which we still reference today with “Mayport.”

“Jacksonville is blessed with a rich cultural heritage that serves as the roots of our identity while enriching the greater story of how modern-day America began. During four and a half centuries, the people of Northeast Florida have established a firm foundation for Jacksonville to continue developing into future years as a vibrant hub for business and a destination for travelers,” said Mayor Alvin Brown. “I encourage everyone in Jacksonville to embrace this opportunity to learn more about our journey as a society and our unique posture in American history.”

This community partnership consists of many celebrations and observances taking place to recognize this significant event. Some of these include: [1] 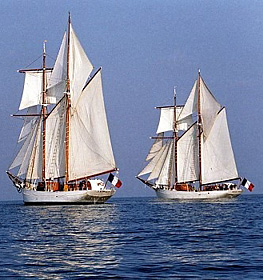 a unified 45-second ship horn sounding and a 4.5 minute church bell ringing up the St. Johns River and surrounding communities at noon on Tuesday, May 1;

The National Park Service will host a rededication ceremony at the Ft. Caroline National Memorial; 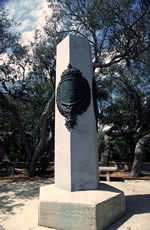 an unveiling reception of the restored 30-foot mural painted by artist Lee Adams that depicts Jean Ribault’s Landing, in the Main Library, downtown; 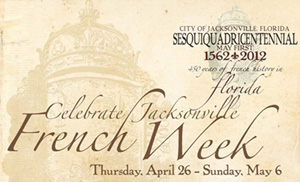 “As Consul General of France in Miami, I am very touched, honored, happy and privileged to witness how the people and the City of Jacksonville have embarked on the commemoration of the 450th anniversary of the French arrival at the St. Johns River, in Jacksonville, and in Florida", says Gael de Maisonneuve, Consul General of France in Miami. “These wonderful events that start on the 27th in Fernandina, Mayport and Jacksonville will be the kick-off of three exciting years of commemoration, that will span all around Florida and comprise publications, exhibitions and symposiums."

In a letter to Mayor Brown, a spokesperson for French President Nicolas Sarkozy stated, “The President of the Republic is thrilled by the idea that the anniversary of this communal history will help consolidate Franco-American relations. In this regard, he feels strongly about France being associated with this celebration.” 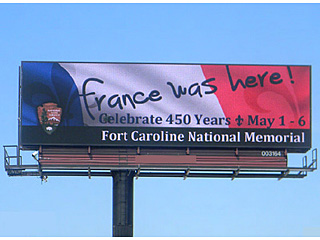 This observance also ushers in VIVA FLORIDA 500, a multi-year statewide commemoration of the beginning of European exploration of Florida.

[1] For specific dates, locations, times and details of these and all events, please visit www.commemorate450.coj.net. The site also provides a listing of historical resources and links to information pertaining to Ribault’s arrival in 1562 that will help inform and educate readers about our unique history.