A group of music students from Tampa, who are part of the "Florida Music Ambassadors" will perform at one of the ceremonies held at the American cemetery in Colleville-sur-mer in Normandy to honor the memory of the American soldiers who came to liberate France and Europe in 1944. The Marching Chiefs of FSU is in Normandy until June 10th as well.

- Performance of the "Florida Music Ambassadors" from Tampa, June 10, 2019

It is at the Normandy American cemetery and Memorial of Colleville-sur-mer overlooking the "Bloody" Omaha Beach that the Florida musical ensemble will play: a great symbol highlighting the close alliance uniting France and the United States for over 250 years.

The city of Tampa, located on the West coast of the State of Florida, nurtures close relationships with the city of Le Havre thanks to frequent exchanges. 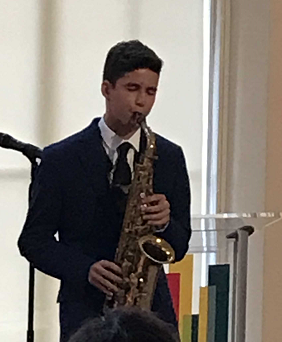 - The Marching Chiefs of FSU in Normandy until June 10th

Florida State University’s world-renowned Marching Chiefs will be the only collegiate band to participate in France’s official D-Day Normandy Parade, marking the 75th anniversary of the bold mission and honoring the brave soldiers who helped win World War II.

The weeklong trip to Paris and the beaches of Normandy from June 3-10 will mark the third time in the Marching Chiefs’ 80-year history that the band has performed overseas.

During the parade, the Chiefs will play “March Militaire Française” as they march about a mile-and-a-half between Vierville-sur-Mer and Saint Laurent-sur-Mer. The two villages overlook Omaha Beach, one of five beaches along the Normandy coast where more than 150,000 American and Allied soldiers landed by sea and air June 6, 1944, in the largest seaborne invasion in history.

The opportunity has special meaning for senior Emilia Addeo, the band’s assistant drum major. Her grandfather is one of the last living World War II veterans. “He served in the U.S. Navy, and when he and my family found out I was going to Normandy for the 75th anniversary of D-Day they were in tears,” Addeo said. “This will be my first time traveling out of the country, and I’m so glad this is the reason I’m going. It’s amazing. Every time I look at the itinerary, I get chills.”

To learn more about the FSU Marching Chiefs here.