As such, «Dis-moi dix mots» is an annual worldwide contest created to celebrate the richness and vitality of the French language. The contest invites students to express themselves through a series of ten words. These words are chosen every year by a number of our francophone partners: France, Belgium, Quebec, Switzerland, and the International Organization of la Francophonie (constituted of 77 states and governments from around the world).

In the spring of 2015, the French Cultural Department in Miami will hold a local video contest for Middle and High School students that are learning French as a foreign language in Florida. The video can be created by an individual student or as a class project. Prizes will be awarded to the student or to the school to be used in the classroom or campus.. 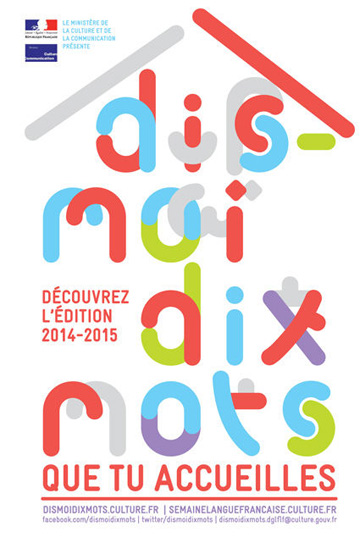 Have a student, group of students or class create a short 1-2 minute video, in French, using the ten words of the 2015 "Dis-moi dix mots" contest and submit it by January 31, 2015. The video must tell a story that illustrates how words and people travel and mix. The video may feature live people, stills, animation or any medium that best conveys their message.

How to submit your entry

Votes will be tallied in order to select the most "liked" videos and a People’s Choice Award will be given. In addition, a jury of professionals (working in Media, French language, and/or Education) will select the 1st and 2nd prize winners.Prizes will be awarded in two categories: middle school and high school. Each category will have a People’s Choice Award, a 1st prize and a 2nd prize. Winners will be contacted in the Spring of 2015 and all participants will be invited to a public event that will take place in Miami on March 19th, during school hours.