Home > Vincent Moon in Miami: uncovering the essence of music

Vincent Moon in Miami: uncovering the essence of music [fr]

Coming from photography, Vincent Moon explores the possibilities given by movies to transmit the original spirit of music. He questions the idea of filming music on stage, and therefore shoot music out of the stage, in its natural environment (a street, a village, a car, a house…), using the technique of “cinema vérité”. 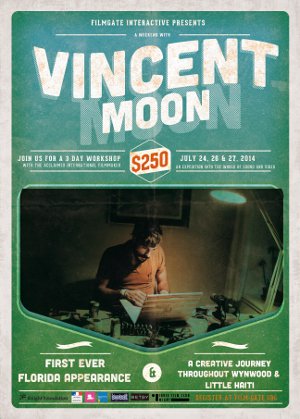 The French indie filmmaker, whom The New York Times stated in 2011 that he reinvented the music video, remains on the flipside of big Industry. Indeed, his works promote music from famous bands such as R.E.M. or Arcade Fire as well as emerging artists or Asian and South American local communities.

A retrospective of his works will be presented at the Screening Room at 7pm on July 24. Vincent Moon will also lead a workshop from 11am to 4pm on July 26 at the Little Haiti Cultural Center and another one from noon to 5pm on July 27 at Sweat Records. The workshops will consist of the video exploration of Little Haiti and Wynwood and some of Miami’s best musicians.

The event is organized by Indie Film Club Miami. It is sponsored by Barton & Guestier (http://www.barton-guestier.com/).