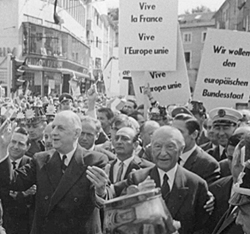 In 1994, to mark the 50th anniversary of the D-Day landings, Radio France, Ouest-France and the Memorial launched the “evening gatherings.”

During these evenings of recollection, thousands of people came to share their experiences in dozens of towns and villages in western France.

In 2014, the Memorial, TVs and newspapers will focus on the theme of Reconciliation.

“After five years of war, how can we forgive each other? How can we talk about these events again? Under what circumstances, before and after the Élysée Treaty, have men and women decided to temper their resentments and attempt to go toward one another, to create twinning committees and resume a dialogue? ...”