Home > During the two day international entrepreneurship forum bringing together (...)

Like hundreds of entrepreneurs and decision-makers, the representatives of the startup Tilkee from Lyon, France, would have never missed the second Worldwide Symposium of the Foreign Trade Advisors of France that took place in Miami Beach the 7th and 8th of May 2015. 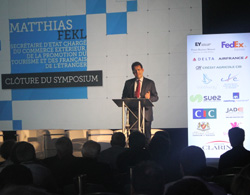 On this floor the French Minister of Foreign trade, Matthias Fekl, highlighted the important mission of French entrepreneurs and especially the one played by the Foreign Trade Advisors of France at the side of first-timer entrepreneurs willing to export as well as the executives seeking to expand their activity aboard. Minister Fekl emphasized the power and the value of their advice and expertise.

Knowing that French companies are less inclined towards export than their European counterparts, the guidance of the Foreign Trade Advisors of France is a key tool to boost their sales and to increase France’s competitiveness in a global market.

The startup Tilkee, which develops a software supporting business proposals, was one of the many SMEs participating in the symposium that had chosen to expand their activity abroad. Selected by the Symposium’s organizers, Tilkee took great advantage of this two-day forum. Anne Fourdraine, sales director of the company, who was interviewed on the spot said that they have benefited substantially from “the best practice exchange and the network offered by platform. “It would have taken months to gather so many great tips and suggestions”, she added.Interview.

E-Toile: Anne Fourdraine good afternoon, you are Tilkee’s sales director, could you explain to our readers what Tilkee does offer and who is behind this new app? 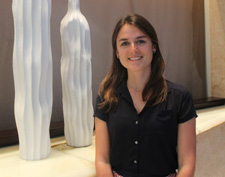 Thanks to detailed stats provided by this tracking solution, the sales team can rate prospects’ buying intention and organize targeted follow-ups. Tilkee indicates in real time if the business proposal has been opened, the number of pages that have been checked, the length of time, if documents have been downloaded and much more. The sales team gathers all the necessary information to reach out to customers and prospects alike at the top of their interest. It is a great way to save time and gain money!

As far as who is behind the wheel, Tilkee was created in Lyon two years ago, in 2013, by two entrepreneurs, Sylvain Tillon and Tim Saumet. Today, the startup has already 10 employees.

In France, its commercial solution has been adopted by 600 companies. During the first months of activity, Tilkee attracted mainly small-size businesses. As the months passed, far bigger companies such as Total, EDF, and Orange subscribed to its service.

E-toile: Why did Tilkee choose to be at the second Symposium of the French Foreign Trade Advisors that took place in Miami Beach, the 7 and 8 of May, 2015?

One of these business trips took us to Philadelphia. This city on the East coast of the United States, not far from France and less expensive than New York, seduced us with its startup-friendly environment. Indeed, there is a very active and rewarding atmosphere with a strong focus on logistical and technological support. Most of our meetings and appointments were done thanks to Meetup and the support of local economic organizations such as the Greater Philadelphia Chamber of Commerce and the French-American Chamber of Commerce of Philadelphia.

For the same reason, we opted to participate in the Symposium. It is an ideal place to meet other French companies that work abroad.

The idea for us was to meet with professionals and entrepreneurs who had an international experience and who will be able to share it with us.

It was also a fantastic opportunity to find entrepreneurs willing to give feedback on the services we develop.

Finally, it was a springboard to gain more visibility in the US. With the same goal in mind, we have recently participated in a fair dedicated to startups in Las Vegas.

E-toile: What were the most interesting segments during these two days at Miami Beach?

E-toile: Do you think Tilkee could consider opening an office in Florida?